From London Cameos by A.H.Blake:

It stands in a commanding position at the meeting of the ways at Charing Cross looking down Whitehall.

The spot on which it stands is historical, for here for hundreds of years stood the last of the Elanor Crosses erected by Edward I. It marked her last resting-place for the night in a near-by hospital before her burial in the Abbey on the morrow.

The actual cross, of copy of which exists in Charing Cross station yard, was destroyed during the Puritan regime as savoring of superstition and the site was vacant until the Restoration.

This statue, made for Lord Treasurer Weston during the peaceful years of Charles I's reign and destined for his park at Roehampton, was handed over to a man called Rivett for destruction. He secreted it and brought it out at the Restoration.

After some of the regicides had been executed on this spot, the statue was put up, and in royal fashion Charles I looks down Whitehall to the place where in front of the Banqueting Hall he died.

See it on January 30 covered with wreaths from Stuart admirers, including offerings from descendants of those who suffered for the Jacobite cause in the rebellions of '15 and '45. The statue is by Le Sueur, and the base was the workmanship of Joshua Marshall, the King's mason. 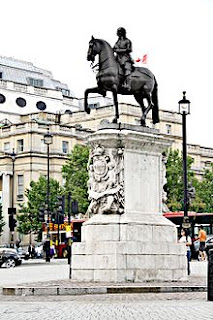 Image taken from Wikipedia
Blake isn't being entirely frank about those wreaths. Back in the 1890s there was considerable controversy when Jacobite loyalists asked for permission to place wreaths at the statue on the 30th. The government of the day refused them, and there was a minor scuffle with the police before the Jacobites were finally allowed to honor Charles on the day of his execution.
A bold and daring man is Mr. Herbert Vivian [leader of the group], Jacobite and journalist wrote the Western Morning News. He announces to all and sundry that, law or no law, he will... attempt to lay a wreath on the statue. I have not heard whether special precautions have yet been taken to cope with this new force of disorder though, perhaps... one constable may be set apart to overawe Mr. Herbert Vivian.
Before you go crowning Vivian as a hero of the people, he was anything but: his Royalist and Fascist tendencies led him to support Mussolini later in the 1930s.
Said he at the time, the world's galloping consumption will not be arrested until... Kings forget their ancient animosities to unite in a Royalist International uncontaminated and unhampered by the lying, cowardly, malignant Spirit of the Age.
Also, when Blake wrote that piece the statue was incomplete. Back in 1844 someone stole the statue's sword and Order of the Garter, and the items wouldn't be replaced until the Second World War, when the statue was taken under cover for safekeeping during the Blitz.
So from a gaming perspective we have:
From a Megapolisomancy perspective we have a Lever that could be used in several different ways: as a means of causing death, of causing or punishing rebellion, of inspiring fear, of obtaining favors from monarchs, or of boosting any working that harms or helps monarchy.
Moreover there's that missing sword and Order to consider. Lord knows where those ended up, or why they were stolen in the first place. It happened in 1844 on the day Queen Victoria opened the new (and current) Royal Exchange, its wooden predecessor having been destroyed by fire. Presumably there's some significance in that, though what is difficult to see. The Order of the Garter is a chivalric award, associated with the Military Knights of Windsor. The symbiology of a missing sword is easy to see. The removal of honor and virility both - assuming someone actually wanted to make a point, and not just to steal shiny things.
OK, so all that in mind:
Hanged and Beheaded
A prominent Indian speaker and journalist, Nadrenda Patel, has been murdered. The body - most of it - was found at Charing Cross just off the Mall very early on a frosty October morning. The head is missing, and forensic examination can determine that the deceased was hung before the head was removed; Mr. Patel died before being beheaded.
Aside from the gruesome nature of the crime, one other peculiarity emerges: in his pocket is an 1808 collection of children's rhymes, bought recently - at the Bookhounds' shop. It still has the shop label on the inside cover.
Naturally the police are deeply suspicious, as is a private detective hired by Mr. Patel's newspaper, Muhammad Parekh, a former military man turned investigator. However the Bookhounds know they never sold that book - or any book - to Mr. Patel. They sold that particular book to a private collector, Mrs. Murray, an unassuming old widow who lives in the West End with three spoilt cats.
Odd thing about that copy; one of the pages, with the rhyme As I Was Going By Charing Cross, is a tipped-in forgery. It shouldn't be there at all, and further investigation finds the invisible ink mystic inscription that drew the supernatural killer to its victim.
Their troubles deepen when Muhammad Parekh dies the same way Mr. Patel did, also in Charing Cross - though not the Mall, this time, and no book, though he does have a pamphlet with that same rhyme in his pocket. The police are convinced they had something to do with it.
The true killer is a paramental summoned up by Mrs. Murray, a rabid monarchist with Jacobite ancestry, who wants to use its powers to punish those who weaken the Empire or betray the Crown. Indian nationalists were her first pick, but she has a long list of potential targets.
This paramental acts as an executioner so it kills in the same way the Parliamentarian traitors were executed - first hung, then beheaded, with the heads going up on public display. Mrs. Murray now has a fourth spoilt cat, that same paramental. However Mrs. Murray doesn't have the spiritual energy to keep this going, and her heart is beginning to skip; should she die before putting down what she summoned up, the freed paramental will do as it pleases - to whoever it pleases.
Enjoy!
Posted by Karloff at 05:23