It has been compared with being reborn. Once a person experiences casino life, the rest of experience pales. People entering a luxurious casino for the first time have noted physical and psychological changes taking place in themselves. They shed their mundane lives, like butterflies emerging from cocoons, and leave their worries and troubles at the door. Once inside, they are insulated from the ravages of the world by the cloak of the casino ...

The jangling crash of slot machines fills the air. You’re surrounded by mass market elegance, a vast honey trap designed to separate tourists from their money in a thousand little ways. Gorgeous couples saunter past towards the high-stakes tables, and tourists wearing Hawaiian shirts sit at slot machines and mechanically press the buttons to the sound of bells and chimes. Gossip in a dozen languages hangs as thick as the cigarette smoke ...

Particularly in Stakes games, which tend more towards high-octane action than John le Carré-esque multiple layers of deceit, a scenario set in a casino sets expectations. Yes, it could be the kind of Vegas strip let's-all-gawk mass market theatre, with pirate ships gunning down frigates every hour on the hour. Vegas shares that kind of showmanship with Macau, but there are plenty of examples of the opposite approach. Monaco built its reputation on high-end gambling, the kind that wouldn't be caught dead in a Hawaiian shirt. Moreover casino architecture design can be a gorgeous flight of fancy, the kind of thing that excites the senses just by being there - even if the point is to maximize the amount of time the average customer spends in their chair.
People go to casinos to stop being themselves for a while. They want to be successful, risk-takers, the sophisticated elite. Whether they are or not is neither here nor there, but the casino's job is to indulge this fantasy. To cocoon the gambler in a comfortable environment, one in which they feel free to do as they please - and spend money for that privilege. To feel like the big winners they know they are.
For the purpose of this post I'm going to use the Casino La Seyne of  La Seyne-sur-Mer, France, as an example. My attention was drawn by this blog post by Archute, and further information has been taken from this architectural document by Archdaily. The Archdaily document is particularly useful for Directors, as it includes floorplans.

Image by Javier Callejas, found via Archute.
La Seyne-sur-Mer has been an industrial, shipbuilding commune; it also built Iraq's nuclear reactors, destroyed by Israel back in 1981. It is part of Toulon, itself a major naval port, home base to the Mediterranean fleet;  La Seyne-sur-Mer is to Toulon's west.
In recent years La Seyne-sur-Mer became more of a tourist destination, exchanging its shipbuilding docks for hotels and parks - not a million miles away from the changes that turned London's Canary Wharf from a maritime hub to a high-tech commercial hub. It's part of the Riviera, the famous Côte d'Azur, with its brilliant blue ocean.
According to Archute: Visually it is a wide, relatively low, and geometrically simple building, said to resemble a great, docked ship from certain angles. It is only up close that you notice some of its sleek, glass-walled sides. The casino is also situated beautifully, in between an active marina and a new public park, as well as near a newly opened hotel.
It's relatively small as casinos go, if its Companies page is to be believed. It has less than a hundred staff, and earns less than $10 million revenue per annum. As a very rough comparison, the Hotel Ritz Paris employs over 400 people, while the Société des Bains de Mer of Monaco employs over 4,000 casino staff spread across several different installations - though with COVID those numbers have fluctuated.
On the other hand it is very new; the build completed in 2016. That implies everything is as modern as can be managed. It also implies there may be snags that can be exploited; there are always problems with new build.
According to Archdaily: The newly completed complex is bordered to the east by a great leisure craft marina and to the west by a recently landscaped public park, at the end of which, just by the old drawbridge, stands a new three star hotel. The casino is thus at the heart of a series of large existing and future installations in the centre of a cultural and commercial hub which will breathe life into the old brick buildings, docks and the marina extension, along a privileged and autonomous beachfront. 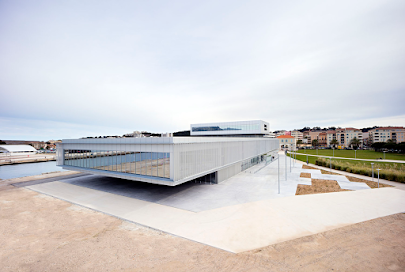 Image by Javier Callejas, found via Archdaily.
Now we've gone this far, let's talk about some scenario seeds that might use this location.
Data Tap. A hacker team set up a data leak to steal the personal information of the casino's high rollers, and everything was going according to plan - when the guy who was supposed to be extracting the data dropped dead of an overdose. Nobody else on the team knows how to remotely extract the data, and time is a factor, so somebody's going to have to go into the casino and take out the device manually. That means bluffing your way past security, getting into the theatre (seats 500), cracking open the cooling system and taking out the data collection device by hand. Sounds like a job for professionals - but why did that fella drop dead, anyway? Was it really an overdose, or did something else happen to him?
Beautiful Foil. An asset of interest who happens to be very close to a Conspiracy Node bigwig is currently enjoying the casino's hospitality. They particularly enjoy Texas Hold'em, and the casino boasts precisely one Hold'em table. If the agents want to find out more about the Node bigwig they're going to have to talk to the Foil, but that means getting into the Casino and staging a showdown at the poker table. Or perhaps inveigling the Foil to a dinner at one of the Casino's luxury restaurants, or maybe just cocktails at the bar overlooking the marina. Better find some way of neutralizing the Foil's personal security, or Fido's liable to tear the interfering agent a new one.
Hollow Triumph. A former Cospiracy asset, now a desperate freelancer trying to stay one step ahead of his former comrades, has hit upon the perfect retirement scheme - rob the Conspiracy, which owns the casino, of hundreds of thousands in Euro it has in its vaults. This asset has inveigled his way into the casino as a croupier under a false identity, and is bringing in experienced professionals to help him stage the robbery now he's been able to case the joint. However those professionals don't realize they're being conned; he doesn't want money, he wants revenge. He's staging this robbery the same night his former master - his tormentor - is meant to be visiting the casino aboard her superyacht, docked at the marina next door. The casino vault isn't a vault; it's a vampire safehouse, where Conspiracy bigwigs come to meet face-to-face. He figures his heist buddies are useful scapegoats, and by the time the Conspiracy finishes chasing them down he'll have got what he wanted. [Potential Initiation scene for new characters.]
That's it for this week. Enjoy!
Posted by Karloff at 06:43