I talked about my purchases last week and now it's time to make use of one: London Cameos, by A.H. Blake, F.R. Hist.S., F.R.G.S. 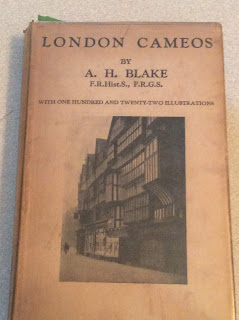 The entry shows a bust of Apollo, but given the condition of the book I'm not going to reproduce that here. In any case you'd get very little from the photo - ultimately one bust looks very much like another, storied history or not.

The text is as follows:

Child's Bank, No. 1 Fleet Street, is old in history and rich in treasure. Here is one - the Head of Apollo, which was at the back end of the Jonson Room in the Devil Tavern, afterwards taken over and incorporated into the Bank [in 1787].

At this tavern the Royal Society used to hold its meetings, and Jonson collected together congenial spirits to those festive gatherings that Herrick, the one-time clergyman, celebrated in his well-known verse:

Welcome all who lead or follow
To the oracle of Apollo.

There is no doubt that here, as on Bankside, the wit combats took place between Shakespeare and Ben Jonson, as we might say, in the presence of this bust.

Others who loved the tavern were Swift and Addison, and even Dr. Johnson.

Dr. Johnson's memorable visit was to honour the occasion of the publication of Mrs. Lennox's first novel, and he gave her a crown of laurel leaves and they kept it up till eight in the morning drinking cups of tea.

The full sign of the inn was 'The Devil and St Dunstan' and the host was the well-known Simon Wadloe, King of the Skinkers as Jonson called him.

Simon was succeeded by his widow, and then by his son John, and Pepys was mightily struck by the company of young men all in white which young Wadloe organized to greet Charles II on his entry into London at the Restoration.

The bust still exists, as does Child's Bank, and a plaque honouring the old Devil Tavern can be seen at Fleet Street. The blog Exploring London has more information, and mentions that among other notorious Londoners the Devil is linked to highwayman John Cottington, aka the Mull Sack.

Cottington, called the Mull Sack after his favorite tipple, robbed both Oliver Cromwell and Charles II in exile in his day. One of nineteen children of a bankrupt haberdasher who was so ruined he had to be buried by the parish, Mull Sack apprenticed as a chimney sweep before turning to a life of crime. Early in his career he married a transvestite by mistake, thinking her to be a young woman who wouldn't give up the goods before marriage. Apparently this turned his head, for soon after this he fell in with a group of fearful women calling themselves the women-shavers, whose idea of fun was to strip girls naked, shave every hair wheresoever it might be, and whip them soundly. This couldn't last forever, and the women-shavers had to flee the country, several of whom went to Barbados. [Having met some Bajans, I can well believe it.]

Mull Sack turned to a life of crime, first playing gigolo with the wife of a merchant, then when she died and the money ran out, turning pickpocket. This went reasonably well, but a botched attempt on Oliver Cromwell's purse persuaded him the time had come to take to the open road, which he did with aplomb. Sometimes solo, sometimes in company with another rogue or two, Mull Sack made the highways hot, and when not robbing carriages passed himself off as a well-to-do merchant. This is when he becomes associated with the Tavern.

He was briefly arrested and put on trial at Reading after a successful six thousand pound score, but managed through tricks and bribery to avoid penalty. Shortly after that he fled across the water with the help of his married lover, and made the acquaintance of Charles II, who he also robbed. However he obtained such secret information from this that he hoped to buy a pardon from Cromwell, and went back to England to tell all.

Unfortunately for Mull Sack the Protector was not favourably inclined, and the notorious bandit went to the gallows at Smithfield Rounds in 1655, at the age of 45.

A Skinker, incidentally, is someone who serves drink.

The name Devil Tavern is supposed to come from the pub's old sign, which showed the Saint pulling the Devil's nose with a pair of tongs. The precise origin is unclear; it may have come from St Dunstan-in-the-West, the nearby medieval church. If you've been following me for a while then you may remember me mentioning St Dunstan's in a different context - Sweeny Todd, the Demon Barber. The murdering scoundrel hid the remains of his victims in the crypts of St Dunstan's, accessed by underground tunnel. Saint Dunstan is also the patron of goldsmiths, and at one time the area was full of them. It may be the pub's sign was designed to flatter them, and encourage trade.

Saint Dunstan himself is supposed to have taken his turn at the forge, tongs in hand, which is why he uses them to pull the Devil's nose. According to legend the Saint was asked to make a chalice, and agreed, but during the work realized that his client was the Devil himself. Dunstan took his tongs and put them in the fire, waiting till they were red-hot. Then he turned on the Devil and caught Satan's nose in his tongs, holding tight till he felt the Devil was vanquished. "These are the tricks of Devils, who try to trap us with their snares whenever they can. But if we remain firm in the service of Christ, we can easily defeat them with his help, and they will flee from us in confusion."

So with all that in mind, let's put together a Bookhounds scenario seed:

One of the Bookstore's regulars is a Shakespeare obsessive, whose dream it is to track down the lost play Cardenio. Though the regular is willing to pay any price - creating a Windfall for the shop and increasing its Credit Rating - to date the characters have not been able to obtain the item.

However according to a book scout (either NPC or character) a very disreputable character claims to know "how to make Apollo speak." This peculiar gentleman says he can conjure up spirits and make them talk, and proposes to use the bust of Apollo, now kept at Child's Bank, as a focus for his ritual. All he needs are some Comte d'Erlette pamphlets as payment, and blood soaked by a hanged man's blood as a material component, and he'll get Shakespeare's ghost to give up the goods.

Though peculiar, this wizard does know the ritual and can perform it as a demonstration should the characters wish. Going through this kind of ritual first-hand is fairly traumatic (3-point Stability check), but it is convincing, and the necromancer can produce other forgeries to show he's done this sort of thing before. Besides, he points out, is it really a forgery if it's Shakespeare's own play recounted by the man himself?

The characters will need to obtain the blood-soaked earth. This is more difficult than it used to be in the days when public hangings were held at Tyburn or Smithfield. However some investigative work, and possibly a bargain with ghouls, finds a suicide's hanged corpse that nobody else has discovered yet. It's another 3-point Stability check to gather the raw materials.

They also need those pamphlets. This bit's best left to the Keeper, but a raid on some private archive or, better yet, an auction in a particularly seedy establishment - some Soho den of vice, perhaps - solves that problem.

Then they need to get into the Bank where the bust of Apollo is kept. It's the oldest bank in England and holds the accounts of the great and good, so it's reasonably secure. Difficulty 5 tests needed either to sneak or bluff past security. They can either carry off the bust or conduct the ritual in the Bank. The latter might be the easier option; Difficulty 6 tests needed to get out of the building with a life-size head-and-shoulders marble bust. There may also be megapolisomantic benefits to leaving the bust where it is; it's current location is as close as it's possible to be to the old Devil Tavern, where Shakespeare and Jonson had those famous battles of wit.

The ritual begins (5-point Stability test) and all goes well at first. Whoever's on note-taking duty gets some golden material, not just from Shakespeare but from Jonson, Swift, Dr Johnson and other guests of The Devil. It all goes wrong halfway through when the shade of Mull Sack interferes. The desperate robber doesn't like the afterlife or being ignored in favour of some scribbling buffoon, and attempts to possess one of the group. The necromancer suffers a heart attack and drops dead, leaving the Bookhounds with a partial Shakespeare script, a ritual rapidly getting out of hand, and a vengeful highwayman who will not stay in the grave if he can help it.  Using the blood-soaked earth as a weapon against Mull Sack will get rid of him, but also waste some of the ritual component that the Bookhounds need to keep Shakespeare talking. Just how greedy are the Bookhounds? Will they risk all to get a complete Cardenio?